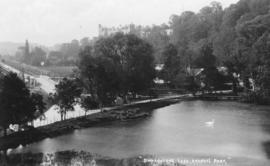 Arundel Castle is in the background.

Cutting from 'The West Sussex Gazette and South of England Advertiser' of an article describing the potential moving of an old mill at Arundel to make way for new property development. The development firm, Wimpey Homes, was willing to demolish the mill and transport it to the Chalk Pits Museum at Amberley, where they would also potentially restore it, all at their own cost. Mr. Miles Southcombe was the spokesperson for Wimpey Homes, and the mill was previously occupied by James Penfold, Ltd.