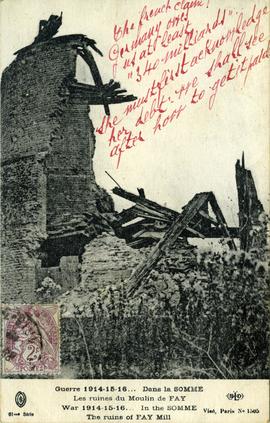 Postmarked 2 July 1919. The reverse of the postcard is of interest for philatelists. It is addressed to "Sirs Winox Ltd. Stamps for Propaganda, Mailing Office, 106 Queen Victoria Street, London. SW1". Winox Limited was an organisation that collected propaganda and commeroative stamps. This from the The Association of British Philatelic Societies Ltd. "CAMPBELL-JOHNSTON, Louis 1862-1929. Chairman of Winox Ltd. Collected Propaganda and Commemorative stamps. Issued Winox War stamps (six million) 1914, and Winox Animal Lovers' stamps, 1918. His extensive collection of poster stamps, mainly advertising exhibitions, and covering issues from about 1850 to the mid-1920s, was given to the British Museum by Mrs Florence Campbell-Johnston in 1932. It is now at the British Library." The stamps on the reverse include a pink/purple French stamp depicting Douglas Haig, and a blue stamp with Hebrew text.