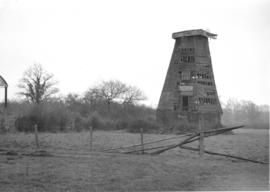 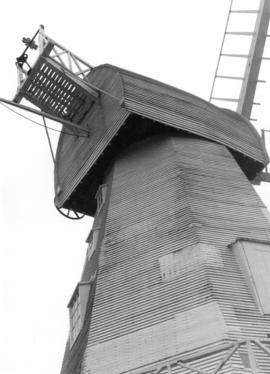 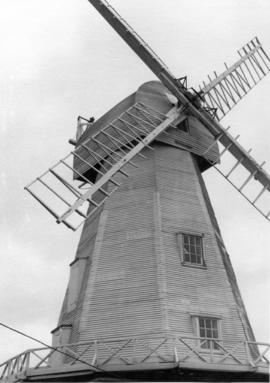 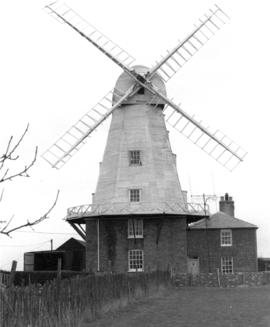 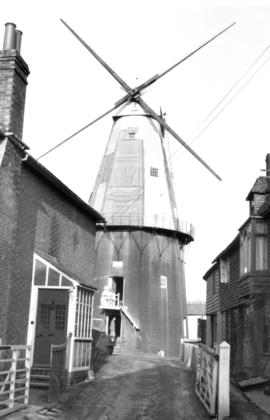 With no sweeps, some weatherboard temporarily covered. 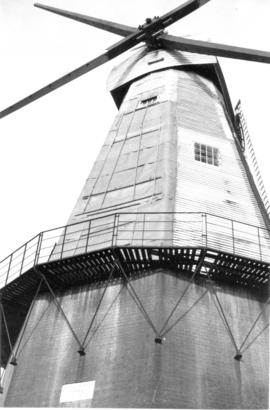 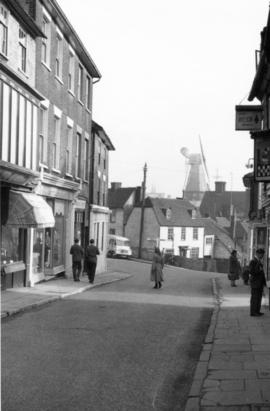 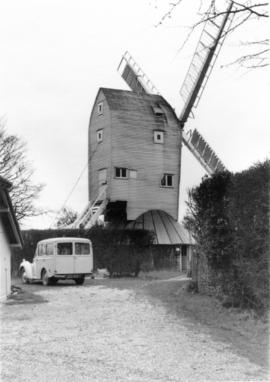 View towards entrance to buck, side and rear of sweeps, Stocks Mill, Wittersham 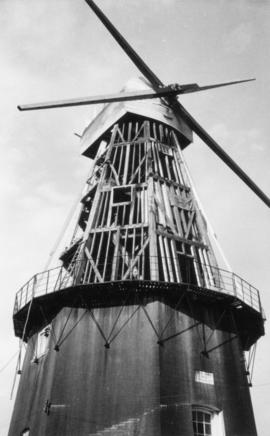 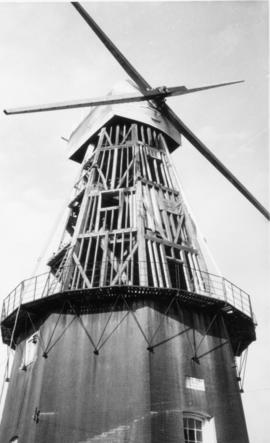 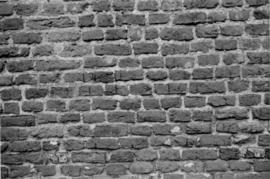 Brickwork on wall opposite former wheel ie. opposite end of mill that is in photograph of whole mill 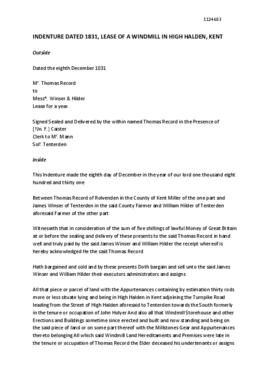 Lease of a windmill at High Halden, Kent

Single vellum sheet (approx 41 x 61 cm); lease for one year of a Windmill and surrounding land in High Halden, Kent. Original document available for reference. For content click on the link to the document transcription.

Bundle of legal papers relating to a mill at Guilton, Ash

The bundle contains papers, receipts and accounts concerning the ownership of Guilton Mill, Ash in the late 19th century and includes: a counterpart lease dated 14 December 1898 between Thomas Marshall (miller and lessor) and Frederick John Collard (dairyman and lessee) of "all that Windmill for grinding corn and other grains commonly known as Guilton Town Mill"; the last will and testament (and associated probate papers) of Thomas Thorn dated 2 October 1884 (codacil dated 31 January 1887) which grants rights in respect of his freehold estate (Guilton Town Mill) to his wife and then to his daughter Harriet and her husband, Thomas Marshall; the last will and testament of Thomas Marshall dated 7 August 1896 (codacil dated 5 January 1897); a Trustees Account of Receipts and Payments under the Bankruptcy Act 1890, concerning an arrangement between Frederick John Collard and his creditors.

Millwright's report on the fire

Bundle of papers relating to The Black Windmill, Woodnesborough

The bundle relates to the Black Mill, Woodnesborough which burned down in 1885 and features miscellaneous accounts, cheques, receipts, and bills, many of which concern mill owner, Henry Famariss, and his insurance claim following the fire. Notable documents include: an undated inventory of the contents of Black Mill; a lease (and counterpart lease) dated 30 August 1862 between Eliza Oliver and Stephen West for the hire of various premises, including Black Mill at Woodnesborough and a post mill at St. Mary the Virgin, Sandwich, Kent; a lease of the same properties between Henry Famariss and Francis Billing (miller) dated 15 July 1883 (together with a further draft lease dated 1884) ; a schedule of deeds to property owned by Henry Famariss dated 17 April 1878; a statement by Thomas Richard Holman of Holman & Collard, Canterbury, millwright, regarding his knowledge of the Black Mill as, "one of the best of its kind in the count[r]y" and estimating the cost of restoring it; W.C. Simmons' builder's specification and report on the Black Mill, Woodnesborough, dated 6 March 1885 providing estimates of value and describing the dimensions of the mill prior to its destruction by fire ("a very excellent and powerful one of its kind one of the best in the neighbourhood"); Henry Famariss' claim for £900 under his insurance policy with the Midland Counties Insurance Company.

Bundle of probate papers relating to George Franks of The Mill, Staple

Probate papers to and from the District Probate Registry at Canterbury together with correspondence between the family's solicitors and the executors together with their accounts, all relating to George Franks (deceased) of the Mill House, Staple, Kent. 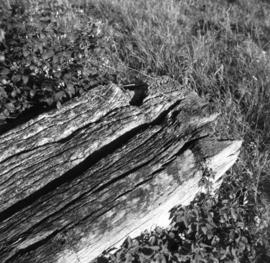 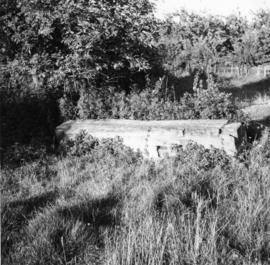