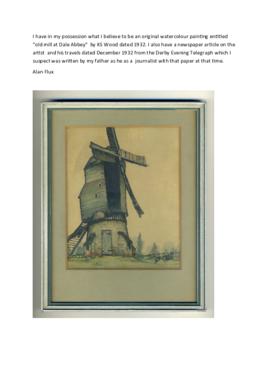 Part of Information sent by correspondents to the Mills Archive

Cutting from 'Yorkshire Post' describing the inspiration provided to windmill artist Karl Wood by an old windmill in Appleton Roebuck. The article gives a brief history of the mill, as well as some background information on Wood and his work.

Illustrated piece in the 'Gainsborough News' about the exhibition at the Gainsborough House Museum in Lincoln, displaying the work of Karl Wood who had been the art master at the local Grammar School. 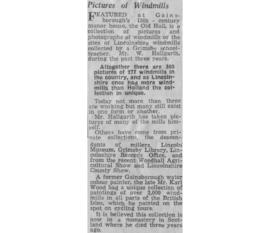 Cutting from 'Lincolnshire Chronicle' describing a collection of pictures of windmills in Lincolnshire collected by Mr. W. Hallgarth. The article provides details about the photos, and also mentions a collection of Karl Wood paintings stored in a monastery in Scotland where he died. 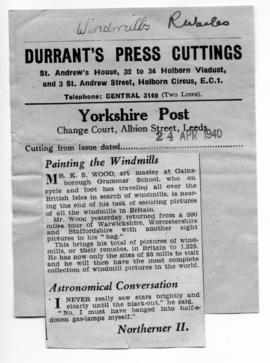 Cutting from the 'Yorkshire Post' about how Karl Wood nears the end of his quest to paint all the country's windmills.

"He is painting all our windmills"

Note in the 'Nottingham Evening Echo' recording that Mr K. S. Wood, the art Master at Gainsborough Grammar School, now has just 93 sites to visit before he achieves his target of painting all the surviving windmills (or their remains) in Great Britain.

Note in the 'Lincilnshire Chronicle & Leader' saying that Mr Karl Wood, the Art Master at Gainsborough Grammar School, has just completed his self-imposed task of painting all the 198 surviving windmills - or their remains - in Lincolnshire.

Article in the 'Daily Mail' about Karl Wood, the Art Master at Gainsborough Grammar School, who is attempting to is trying to complete paintings showing every example of windmills, castles, bridges and other landmarks in danger of destruction before it is too late.

Cutting from 'Leeds Mercury' describing Me. K. S. Wood's efforts to record a photograph of Bocking Mill after hearing the news that it might collapse. The article also mentions Mr. Wood's other artistic exploits to do with mills.