Cutting from 'Cycling' of a submission by Ronald Walter Finch recommending riding around the countryside taking pictures of old windmills. The submission includes map references and tips for any potential enthusiasts.

Cutting from 'Sussex Express' of an obituary for Mr. David Wells, head of Bishop and Wells, Millwrights and Engineers. The obituary provides details of his work as a millwright and some of the projects carried out on various mills by his firm. 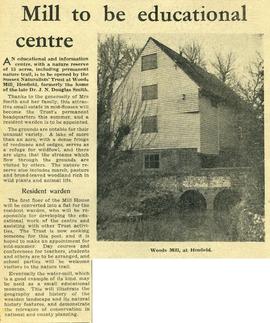 "Mill to be educational centre"

Cutting from 'Brighton and Hove Herald' describing the opening of an educational centre at Woods Mill in Henfield by the Sussex Nationalists' Trust. The mill was donated for this purpose by the family of the latre Dr. J. N. Douglas Smith, the previous owner. The article also contains details about the mill's intended use after the conversion.

Cutting from 'Argus' of an article by Veronica Kelly describing the potential conversion of Provender Mill in Horsham into a home by the Rev. Paul Brant. The plan was supported by George Pinion, chairman of Horsham Housing Committee.

Cutting from 'Evening Argus' of an article by Ben Darby describing the establishment of the headquarters of the Sussex Nationalists' Trust at Woods Mill in Henfield. The article goes over how the mill and surrounding land was donated to the Trust by previous owner Mrs. G. Smith in 1966, and gives a description of the mill's role as a museum and nature trail.

"Man who will fish from bedroom"

Cutting from 'News' describing the conversion of St Helens Mill on the Isle of Wight into a home for Michael Spiers and his family. The mill was bought by Mr. Spiers from the Bembridge Harbour Company, who bought it from British Rail. The article also contains a brief history of the mill and plans for its conversion.

"Goodbye to all that"

Cutting from 'Evening Argus' of an article by Phil Dennett describing the relocation of windmill maintenance firm Hole and Son. The article gives a brief history of the firm and some of the windmills they worked on, including Jack and Jill at Clayton, Argus Mill near Mayfield, and Shipley Mill near Horsham.

"All change at the mill"

Cutting from 'Evening Argus' of an article by Phil Dennett describing the relocation of millwrighting firm Hole and Sons from Burgess Hill. The article mentions some famous windmills the firm has worked on, as well as specific roles played by different members of the Hole family in the firm in the past.

Cutting from 'West Sussex County Times' of an article by Sarah Evans about windmill enthusiast Rodney de Little and his book 'Windmills of England'. The article gives a brief review of the book and goes over de Little's history and his interest in windmills. 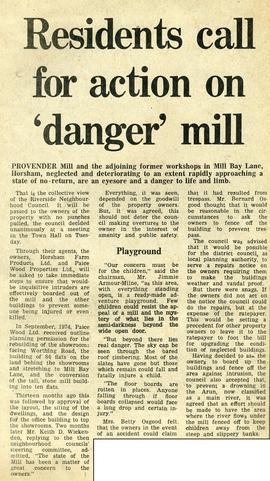 Cutting from 'West Sussex County Times' describing the hazard perceived by the Riverside Neighbourhood Council by the state of Provender Mill in Horsham. The article goes on to mention that the Council demanded owners of the mills - Horsham Farm Products Ltd. and Paice Wood Properties Ltd. - to board off the property to avoid any danger to people trying to enter the buildings.

Cutting from 'The Post' describing a fire at Pagham Mill in Bognor Regis. The article mentions that the damage to the building was extensive, and that the owner Mr. Charles Baker-Beall was contemplating its demolition. 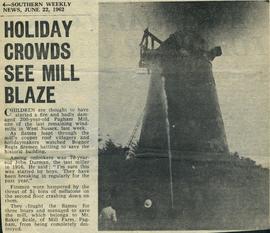 Cutting from 'Southern Weekly' describing a fire at Pagham Mill in Bognor Regis. The article mentions that the damage to the building was extensive, but that firemen were able to save the building. It also specifies Mr. Baker-Beale as the owner, and Mr. John Durman as the last miller in 1916. 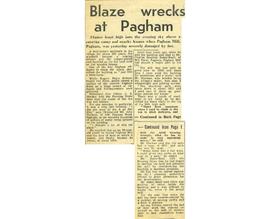 Cutting from 'Portsmouth Evening News' describing a fire at Pagham Mill in Bognor Regis. The article mentions that the damage to the building was extensive, but that firemen were able to save the building. It also specifies Mr. Baker-Beale as the owner, and includes a brief history of the mill and memories from Mr. John Durman, who was the last miller in 1916.

"Save the mill if he wins"

Cutting from 'Evening Argus' describing a declaration by Mr. C. S. Baker-Beall, owner of Pagham Mill, that he would preserve his windmill and open it to the public if an application to build a petrol station between the mill and the road was approved. The article mentions that the council was opposed to this idea, and their objection was supported by deputy clerk Mr. Eric Loveys, area planning officer Mr. L. N. French, and chief planning assistant Mr. R. A. Cooke.