One sheet of vellum measuring approximately 56 cm x 33 cm comprising a conveyance by Thomas Wylford to Robert Hovynden, clothier, of the mill and pond at Hockeredge Mill and Hockeredge Ground, Cranbrook. 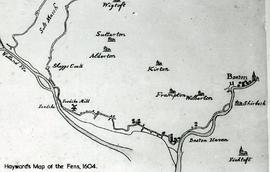 One sheet of velum measuring approx. 40 x 29 cm and bearing its original seal. On the reverse, "16 June 1612, Richard Langrigge & Wm Birkhead, Conveyance of Moietie of Water Corn Mill". The conveyance concerns land "in the said Countie of Westmorland & Commonlie called or known by the name of Mylnton, Mylne". 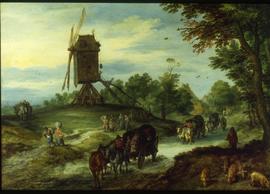 Abstract of title to three mills at Banbury

5 vellum sheets (30 cm x 20 cm) providing an abstract of Mr Darnelly's title to lands in Banbury traced back to: a lease by Queen Elizabeth I to Anthony Cope of two Banbury Mills dated 7 July 1587; a conveyance of a third mill "being a Windmill" from Thomas Hawtaine (son of Henry and Mary Hawtaine) to Richard Vivers dated 18 July 1632; a deed dated 6 October [1616] under which Henry Hawtaine made a "jointure of the premises" to his wife, Mary, being "the windmill the Ivy Close b[y] the Meadow....all part of Easington Farms" which he had purchased "from the king"; a conveyance of "the Fine yard Lands at Nethrop" from Richard Cope, John Churchill and Richard Hastings to Richard Vivers dated 27 April 1616; a conveyance of "the Barns" from Thomas and Edward Kirton to Robert Vivers dated 18 June 1652. The abstract is completed with Mr Darnelly obtaining judgement in Trinity Term 1662 for 900.

Photocopies and typed summaries of indentures dating 1672 and 1765.

Indenture relating to a grist mill at Northpetherton

1 sheet of vellum measuring 77cm x 38cm, signed and sealed by Henry Gatchell and Robert Woodhouse and concerning a grist mill and meadows at Northpetherton (being known as Spall House, woods or grounds). The reverse features numerous notes in different handwriting, relating to the receipt of payments due under "this mortgage", the last one being made in 1712. .

"Scantlings & Dimensions of Engines, with the prices for building the same by Mr. Grundy" 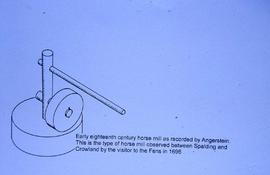 "Dimensions and Scantlings of a 22 Feet Post Engine (Vizt)"

Watermills of England and Wales

This Sub - Series is comprised of 88 photographs of a wide range of watermills located across the length and breadth of England and Wales. The photographs have been arranged into the alphabetical order of the respective name of the county in which they are located. 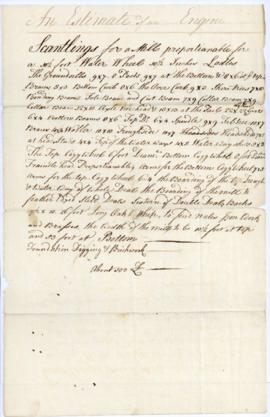 "An Estimate of an Engine"

"Account of Engin by Harrison Engin Maker at Spalding" 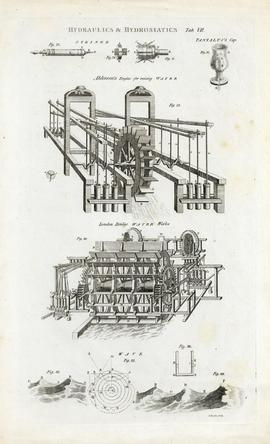 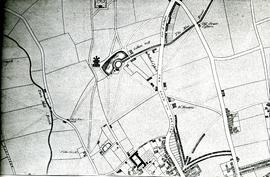 A release of land at Forabury and Minster, Cornwall.

Four sheets of watermarked paper (approximately 31 cm x 38 cm) with double-sided manuscript on three of the sheets. The release relates to two Corn or Grist watermills known as Tubbs Mills as well as the two meadows known as Mill Holme and a variety of other land, fields and premises, much of which named or described as to use/location, in the Parishes of Minster and Forabury. Parties to this indenture quadripartite are James Hill, Hugh Pyper. Richard Wise and Samuel Lyne. 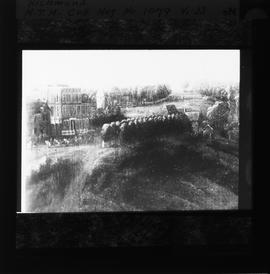 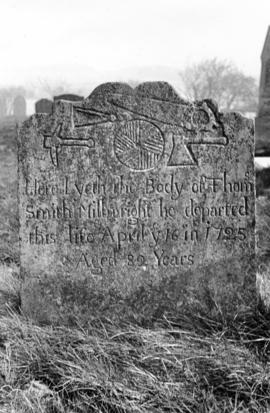 Headstone of Thomas Smith, Millwright, died April 16th 1725 aged 82. May have been the miller at Blakeney.