Press cuttings, photographs and other information on Greensmith's Roller Mill.

Photographs of voluntary work during the restoration process. A considerable amount of work was carried out including providing mechanical components, building dry stone walls and generally improving the site. 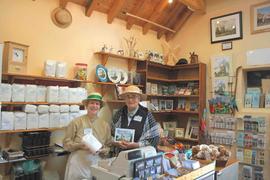 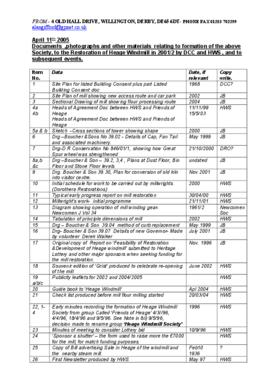 Table of documents and illustrative material relating to the formation of the Society and the restoration of the mill.

Article and detailed explanatory image of the only know representaton of the windmill with four sails. 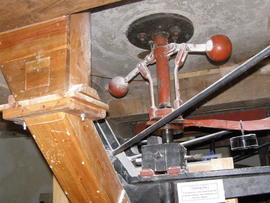 A new governor, made by volunteers, in place at Heage Tower Mill

Alan Gifford comments: "A governor was designed, manufactured and fitted by volunteers." 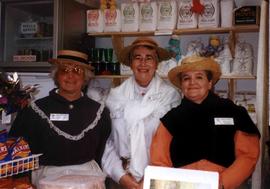 The shop and reception centre at Heage Tower Mill, staffed by volunteers

Alan Gifford comments: "The shop was manned by volunteers who choose to wear costume appropriate to when the mill last operated in the 1900's."

Photographs of millwrighting during the restoration process. Dorothea were awarded the contract to repair and replace defective components and machinery. 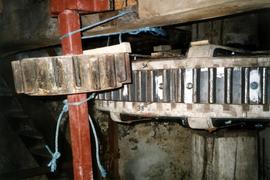 Alan Gifford comments: "When the Great spur wheel's new teeth were matched to the old stone nut it was realised the latter needed re-cogging!" 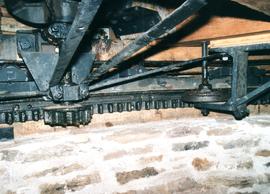 The restored winding gears set up at Heage Tower Mill

Alan Gifford comments: "Unusually there are twin drives from the fantail, plus a hand winding facility if so needed. Also visible is one of the truck wheels. All of this was taken off site and refurbished as needed." 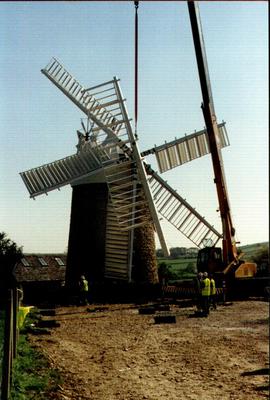 The sixth sail goes on at Heage Windmill 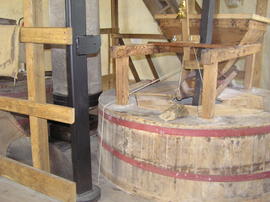 The old vat and furniture retained at Heage Tower Mill

Alan Gifford comments: "The old vat and stone furniture were retained but fitted with a concealed stainless steel lining to satisfy Health and Safety demands."

Alan Gifford comments: "There was only a rough earth/stone floor in mill basement and this had to be levelled before a set of stone slabs could be laid in what was to become the Interpretation /reception area." 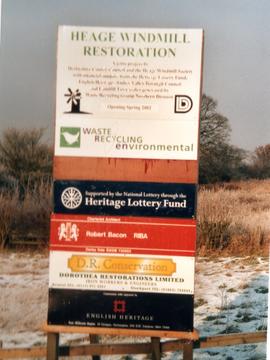 Alan Gifford comments: "At the entrance to the site there was a large display board giving details of major sponsors and contractors."

Photographs of civil work after grants and voluntary input enabled the restoration to commence. This included building a new access road, providing essential services, building a visitor centre and structural work on the mill tower itself. 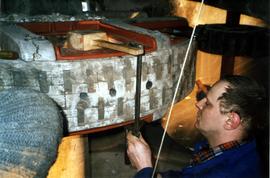 Alan Gifford comments: "The great spur wheel is all wooden and very old. It was originally fitted with a double row of wooden cogs to drive the stone nuts. These had been removed long ago and replaced with bolt on iron teeth segments. It was decided to retain the gear and to replace the segments but in order to be able to mill flour using it reinforcing plates of custom made SG iron were inserted between the arms." 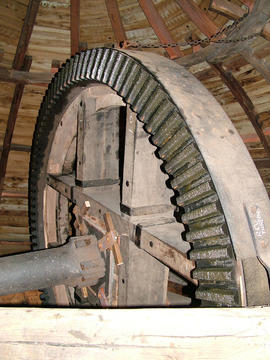 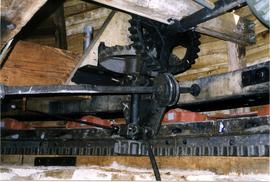 Alan Gifford comments: "The fantail at Heage operates a pair of twin pinions on the rack inside the top of the tower. A hand cranking mechanism is incorporated, to be used if the wind direction has changed significantly since last in use. This entire system was completely overhauled by the contractors."