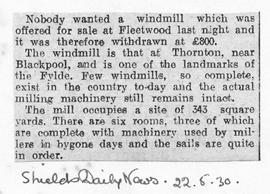 "Sale of Windmill was withdrawn"

Cutting from "Shields Daily News" reporting that nobody was interested in the sale of Thornton Windmill and therefore it was taken off the market. 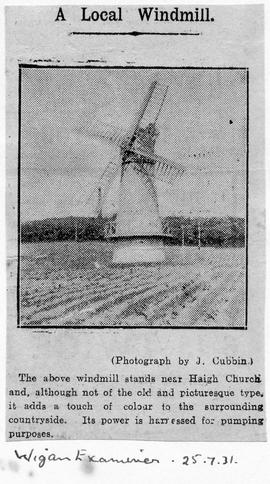 Cutting from "Wigan Examiner". A picture of the Brewery Windmill near Haigh Church, Lancashire, powered for pumping purposes. 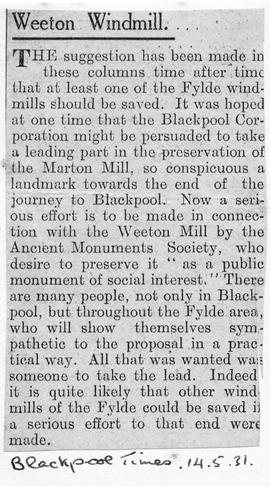 Cutting from "Blackpool Times" reporting that now a "serious effort" was being considered by the Ancient Monuments Society in cooperation with the Blackpool Corporation to preserve Marton Windmill. 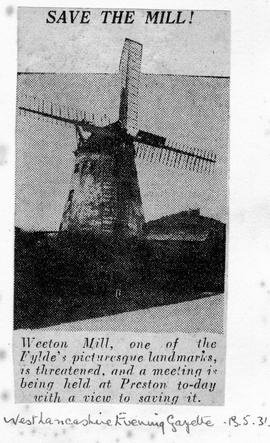 Cutting from "West Lancashire Evening Gazette". Picture of Weeton Mill is "threatened" but a meeting today is being held with a view to preserving the mill. 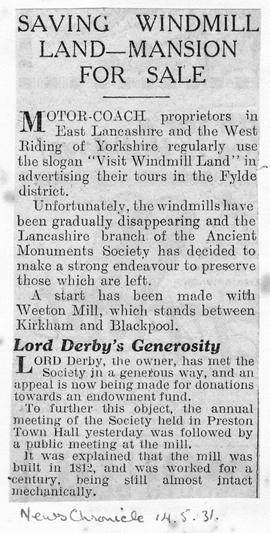 Cutting from "News Chronicle" reporting that the slogan "Visit Windmill Land" was frequently used to advertise coach trips to the Fylde. Windmills have been disappearing and the Lancashire branch of the Ancient Monuments Society has decided to preserve as many of the remaining windmills as possible. The Weeton Windmill is the first step in this preservation programme. 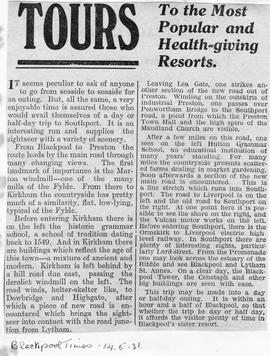 "TOURS to the Most Popular and Health-giving Resorts"

Cutting from "Blackpool Times". The article describes the scenery on a day trip to Southport and the route from Blackpool to Preston. The first landmark of importance is the Marton Windmill "one of many mills of the Fylde".

Cutting from "West Lancashire Evening Gazette". Two women fatally fell from the top of the old Thornton Windmill. After having tea they went up on the platform of the mill when the wooden platform collapsed. The article gives a detailed account of the accident. 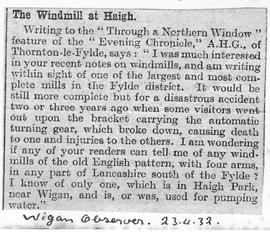 "The Windmill at Haigh"

Cutting from "Wigan Observer". A H G of Thornton-le-Fylde writes in view of one of the 'largest and most complete mills' in the Fylde district. The writer asks any readers if they know of any windmills of the English pattern with four arms in any part of the Fylde.

"A Mill on the Fylde" 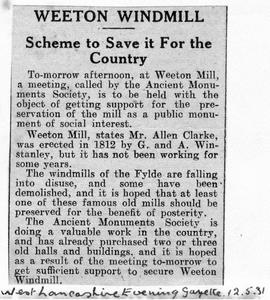 "Weeton Mill - Scheme to save it for the country"

Cutting from "West Lancashire Evening Gazette" reporting that a meeting at Weeton Mill has been arranged by the Ancient Monuments Society to gain support for the preservation of the Mill. Mr Allen Clarke states that Weeton Mill was built in 1812 but has not been working for some years. 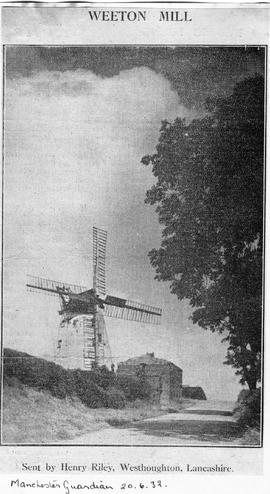 Cutting from "Manchester Guardian". A picture of Weeton Windmill sent by Henry Riley of Westhoughton, Lancashire. 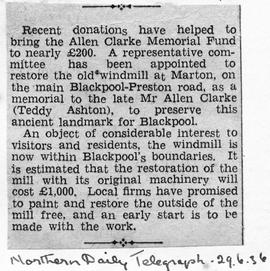 Cutting from "Northern Daily Telegraph". The Allen Clarke Memorial fund was helped with by donation of 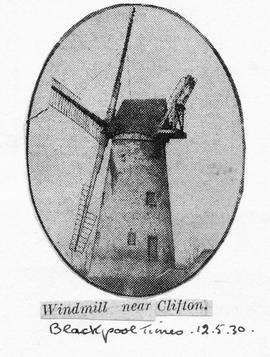 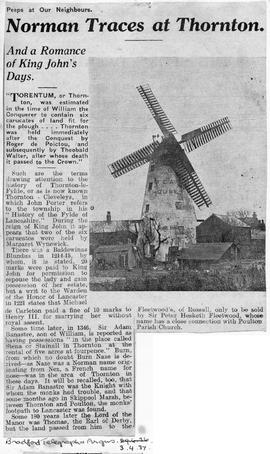 "Norman Traces at Thornton and a Romance of King John's Days"

Cutting from "Bradford Telegraph and Argus". A photograph of Thornton Windmill accompanied by a brief historical resume in context from the Norman Conquest to the present day - the manor on which the windmill stands was passed down to the Fleetwords of Rossall. 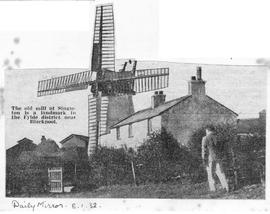 "The old mill at Singleton - Picture"

Cutting from "Daily Mirror". A photograph of the old mill at Singleton is a landmark in the Fylde District near Blackpool. 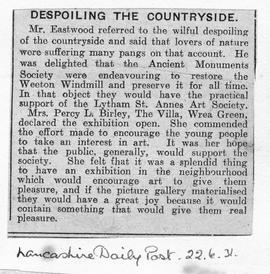 Cutting from "Lancashire Daily Post". In reference to "despoiling the countryside" the writer was "delighted" that the Ancient Monuments Society were planning to restore Weeton Windmill and preserve it for the future. 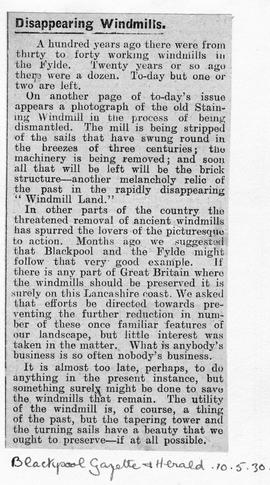 Cutting from "Blackpool Gazette and Herald" giving an insight on the windmills rapidly disappearing from the Fylde and Blackpool landscape. The article claims around 100 years ago there were up to 40 working windmills in the Fylde but today only one or two remain.

Cutting from "Manchester Evening Chronicle". The letter writer takes issue with claims that all landmarks on the journey to Blackpool Tower will have disappeared. The windmill at Clifton is large and still standing (about 250 years old). Staining windmill and Treales can be seen on the train journey to Blackpool. 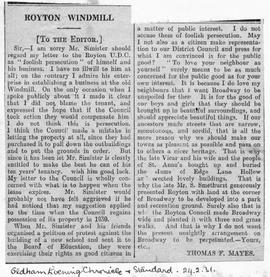 "Royton Windmill - Letter to the Editor"

Cutting from "Oldham Evening Chronicle and Standard". The author responds to the proposed plans to develop Royston mill and adjacent land once current lease expires in 1939.