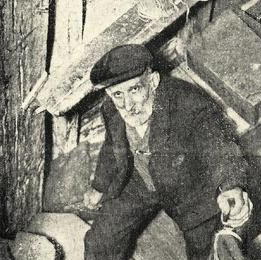 Joseph Rank began working at a small windmill in Hull in 1875. In 1885 he built his first roller mill, Alexandra Mill, and in 1891 the much larger Clarence Mill. In 1899 the company was incorporated as Joseph Rank Ltd. Many other milling companies were purchased, and new mills constructed in ports around the country.

Working 28 years, until about 1918, for Joseph C. Chaplin, owner of Ridgewell Essex.

William Cornwell was born in Littlebury, Essex, in 1851. He was employed as a pupil of Joseph Wisely, a miller at Ickenham, and married Mary Ann Lofts, the miller’s niece. He moved to St Albans, Hertfordshire, as a 'working miller', and then to Bow, London, where his son Ernest, twins Archie and Arthur and a daughter were born. William was employed as manager, director and then managing director at the Sun Flour Mills Company. Ernest also joined the company and was an active member of the Corn Exchange, Mark Lane. He married Perpetua Hambridge in 1913. Sun Flour Mills became a part of the Associated London Flour Mills in 1921.

William then bought the smaller William King Flour Mill at Uxbridge, Middlesex, of which Archie and Arthur became directors, joined later by Ernest after the closure of Sun Flour Mills. William had retired to Wanstead, Essex, in 1926; he died there in 1933. Ernest died suddenly in 1935, aged 56. The William King Flour Mill remained the property of the family until 1955, when it passed to Allied Bakeries, giving its name to the Kingsmill brand of bread.